Picturesque and peaceful Ha Long Bay is hands down one of our favorite places in the world to visit. Imagine more than 2000 limestone islands and islets rising from the green emerald waters of the Gulf of Tonkin. 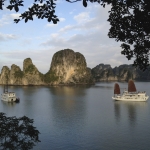 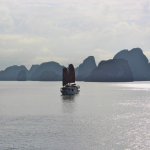 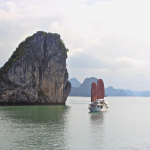 “Ha Long” or “Halong” translates from Vietnamese as ‘where the dragon descends into the sea’, echoing a legend claiming that the landscape of islands was created by a great dragon from the mountains. As the dragon charged towards the coast, its tail gouged and carved out crevasses and valleys; when it finally dove back into the sea, the area filled up with water, leaving only visible the pinnacles. 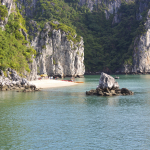 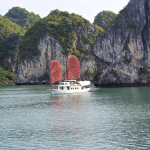 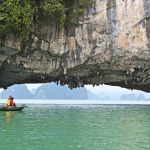 Canoeing around the Bay

There are some interesting variations of this legend as well: Once upon a time, when ancestors fought with the Chinese, the gods sent dragons to help the Vietnamese warriors.  In an attempt to form a barrier, the dragons spit out precious stones that turned into islands. These islands created a wall that protected the Vietnamese people from the invaders. The dragons liked the rocky islands and decided to leave them behind after the war.

Halong Bay was designated a UNESCO World Heritage site in 1994. We were thrilled to discover that in 2012, the New 7 Wonders Foundation officially named Halong Bay as one of New 7 Wonders of Nature of the world.

The Bay is often compared to Guilin in China or Krabi in southern Thailand. All are spectacular, though in our opinion, Halong Bay has certain cultural and physical features that makes it stand apart. Of course, beauty is in the eye of the beholder, so make a trip and see for yourself. 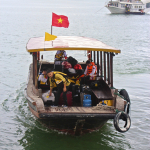 Being taken to the main boat 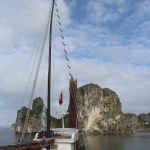 The sun breaks through 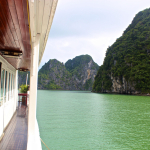 View from the junk

It is possible to visit Halong Bay throughout the year, though few visitors realize that November to February are colder months, with some rain. We took a one night, two day boat cruise on the Indochina Junk in December. The night we spent on the boat was very comfortable, and included a dinner full of creative carvings and food presentations. 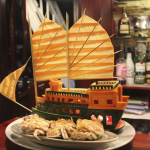 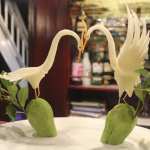 Beyond the boat cruise, visitors to Halong also come to explore the caves. There are a few beaches in Halong Bay, but Lan Ha Bay has idyllic sandy coves which are a short boat hop from Cat Ba Town. The itinerary depends on the boat tour that you choose.

On a fresh and crisp morning, we were taken to a floating fishing village in Lan Ha Bay. 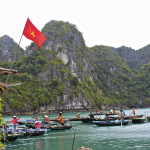 A visit to the Floating Fishing Village on a cool morning 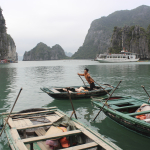 The morning starts at the Floating Fishing Village 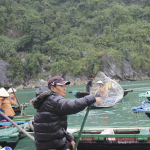 A day out fishing at the Floating Fishing Village 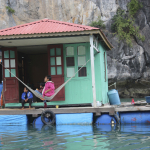 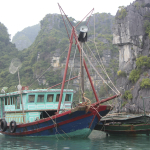 A fishing boat prepares for the day 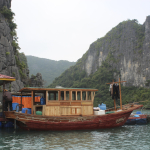 Life at the Floating Fishing Village 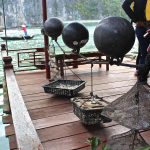 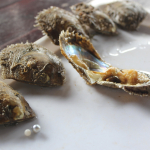 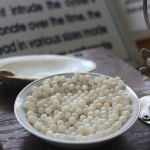 Halong Bay refreshes the senses and the soul. We will be coming back often to this unforgettable seascape sculpted by nature, with its islands, pillars, notches, arches and caves.

We will be back, Halong Bay!

1 comment on Take Me to Halong Bay, Where the Dragon Descends into the Sea