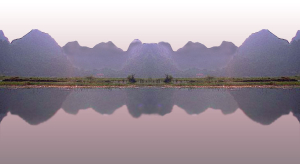 The Perfume River brand and company were founded on the idea of fusion, fusion between traditional Vietnamese culture and the modern global influences which are quickly transforming the new and younger generations, fusion between my childhood past and my adult present, and finally, a fusion between a Vietnam which has opened up to the world thirsty for knowledge, and mindfully curious about other cultures, and an America which also yearns to understand Asia better than ever before.

Hue, the former imperial capital of Vietnam, is the birthplace of my father. As his first and only daughter, I was lucky to have been named after the Song Huong, or Perfume River, which runs through the mysterious, somber city . Hue is a  historian’s dream come true, with numerous 19th century ruins and royal tombs. Struck by the romanticism of the river and cultural richness of the city, I was inspired to dedicate my new venture and mission after the very river which had so then inspired my family.

My family’s move from Hue southward to Saigon, and subsequently to the United States following the political changes in the 70s, changed my life forever. From then, life’s paths led me from the East Coast to Berkeley to Paris, and back to Saigon in the mid-90s to understand more deeply my heritage, and then onward to Europe. It has been quite a ride, and I rejoice at the thought of coming full circle again by creating, designing, and working with women entrepreneurs and artisans inVietnam and Southeast Asia.  My work with them has yielded unique designs in clothing, handbags, and accessories.

I have always loved traveling and exploring different cultures, and I am constantly learning about the richness of my own Vietnamese heritage. Each return to Asia comes with new discoveries and new inspirations for my products. I adore color, one-of-a-kind design and the beauty and simplicity of nature’s gifts.

Therefore, Perfume River’s romantic and ultra-feminine personality is infused with adventure, youthfulness and uniqueness that go with a woman’s desire to develop her own sense of personal style, moving effortlessly between high and low fashion, in keeping with today’s pocketbook mindfulness and achieving balance between work, family and inner self.

I look forward to growing the Perfume River brand, launching new categories for the brand, and continuing to contribute to women and society in Vietnam as well as here in the US. I am grateful for my friends, without whose professionalism and kindness I would not have been able to launch this brand. A big thanks to Mickey Choothesa, Sandy Falcon, Ken Pao, and Kevin Linkous.